Choctaws Fall to 2-1 as DC Loses Big to Patriots 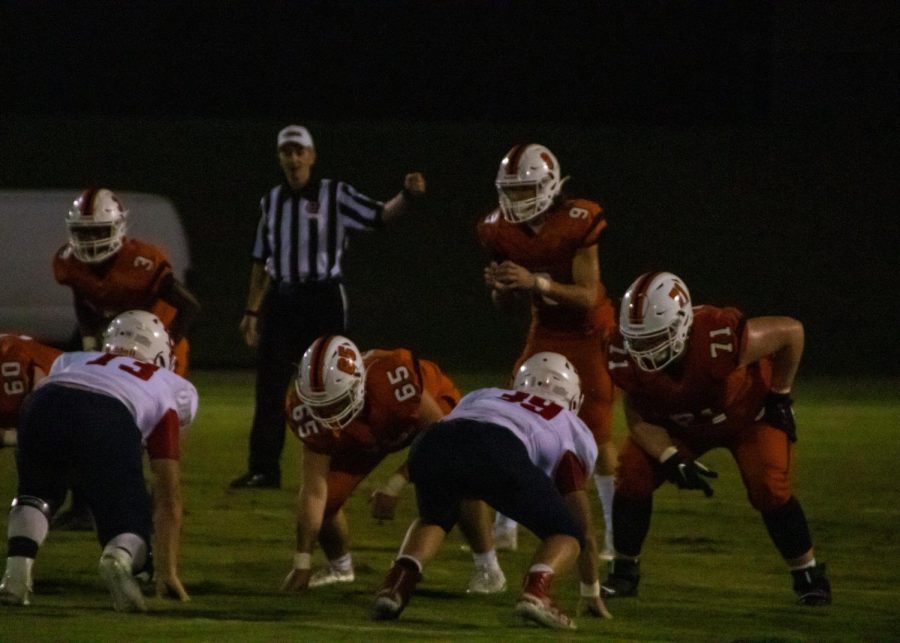 Dyer County faced the Henry County Patriots on Friday night for the first time since last year’s thrilling comeback win in the playoffs. The Choctaws looked dominant in their first two games of the season, beating both Crockett County and Obion County by large margins. Henry County’s offense proved too much for the Choctaws, however, putting up 53 points and overpowering Dyer County from the kickoff.

After a short possession and punt by the Choctaws, the first quarter was owned by Henry County. On just their second snap on offense the Patriots took the lead, as quarterback Ryan Damron completed a 27 yard pass to Sanchez Aldridge. From there the Patriots scored twice more in the first, distancing themselves from Dyer County with a 20-0 lead.

In the second quarter, the Choctaws showed their offensive capabilities, scoring two unanswered touchdowns. A 78 yard run and then goal line punch by Dyer County quarterback Josh Stewart caused the Choctaws to gain momentum. After the first touchdown, Choctaws kicker Corey Piskorski pulled off a beautiful onside kick to get the ball back in Dyer County’s hands at the 40. Again the Choctaws fought to the goal line, this time with running back Bralyn Taylor getting the job done on a two yard rush.

Despite Dyer County’s second quarter show, the Patriots went on to prove that they were the better team Friday. Ryan Dameron threw for 173 yards and two touchdowns, and the rest of Henry County’s offense was not hesitant to pick up where he left off. They would go on to win the contest 53-20.

After Friday’s loss, a couple of things became clear about the Choctaws. First, Dyer County’s defense must stop giving up big yardage plays. Too many times the Choctaws found themselves behind the man with the ball, chasing him into the endzone. DC’s defense has seen players putting up impressive numbers this year, with senior Caleb Briscoe and junior Nick Rushing tackling everything in sight. Senior David Moreno has also asserted himself as a force to be reckoned with, putting his full power behind every hit. If the Choctaws rally behind their leaders and limit their opponent’s number of long plays, they could create a very solid defense.

On the opposite side of the ball, the Choctaws must establish an offense that can move down the field consistently in order to compete with good teams. Last year’s team saw a rare duo in Dain Patterson and LaQuinton Wells, and they left very big shoes to fill as they moved on to the college level. Much of Dyer County’s offense this season has come on the ground through senior quarterback Josh Stewart and sophomore running back Bralyn Taylor, with the tandem showing they can be just as big of a threat as the 2019 Choctaws’ stars at times. Senior running back Dashod Thurmond has also shown his speed in a few breakout runs this season, giving the Choctaws some added depth at the position. Where the Choctaws need to prove themselves, however, is in the air . This season has not seen many passing yards for Dyer County, something the team will need in the playoffs to create more than one offensive threat. The Choctaws are in the exact same position as last year, and have the pieces to make another deep run. The only question is whether or not they will find a way to put them together in time.

Dyer County travels to Ripley for a non region game this Friday the 11th.