How Different Cultures/Religions Celebrate the Holidays 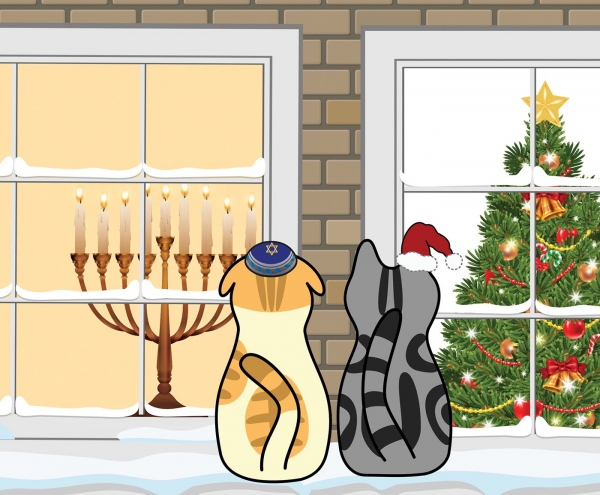 Christmas is an annual holiday for the Christian religion that celebrates the birth of Jesus Christ. It takes place on December 25th. People typically celebrate this holiday by putting up holiday decorations around their homes (the most common being a Christmas tree), hosting family gatherings, and exchanging gifts. Some branches of Christianity recognize Christmas by having late services (as to allow for family time for the rest of the day) while some don’t have service that day at all.

Kwanzaa is a 7 day holiday, or celebration. It is not necessarily a religious holiday, but rather a celebration of African American culture. It starts on December 26th and ends on January 1st. Each one of the seven days of Kwanzaa represents one of its seven principles: Umoja (Unity), Kujichagulia (Self-determination), Ujima (Collective work & responsibility), Ujamaa (Cooperative economics), Nia (Purpose), Kuumba (Creativity), and Imani (Faith). Seven candles are lit to signify each of the seven principles. Like Christmas, Kwanzaa usually includes a celebratory dinner as well as gift-giving.

Hanukkah, or Chanukah, is an eight-day Jewish celebration lasting from December 10th to December 18th. Hanukkah celebrates the rededication of the Second Temple in Jerusalem in the 160s BC. Most Jewish families celebrate by lighting the hanukkiah, a candle-holder containing nine candlesticks: one for each night of Hanukkah, and an extra to light the others. The hanukiah is lit as the Hebrew language is read (from right to left). Hanukkah may also be celebrated by playing dreidel games or eating certain holiday foods.

Eid al-Fitr, also known as “Festival of Breaking the Fast” is a Muslim religious holiday that, depending on the country, can last one to three days; though all major Muslim countries celebrate all three days of the holiday. According to research, it’s celebrated in America from May 12th to May 13th. Eid al-Fitr marks the end of the month-long dawn-to-sunset fasting of Ramadan (the ninth month of the Muslim year). The holiday is usually celebrated by holding social gatherings along with festive meals, praying, and giving gifts as well as giving to charity.

Bodhi Day is a Buddhist holiday that celebrates the day that Siddhartha Gautama, or Buddha, experienced enlightenment. Bodhi Day is on January 20th. Unlike most holidays, Bodhi Day is celebrated quietly. There’s no parades, parties, or special gatherings in the name of Buddha. The most some may do is decorate a Bodhi tree at home and/or  have tea and cookies.