What are the Backrooms? 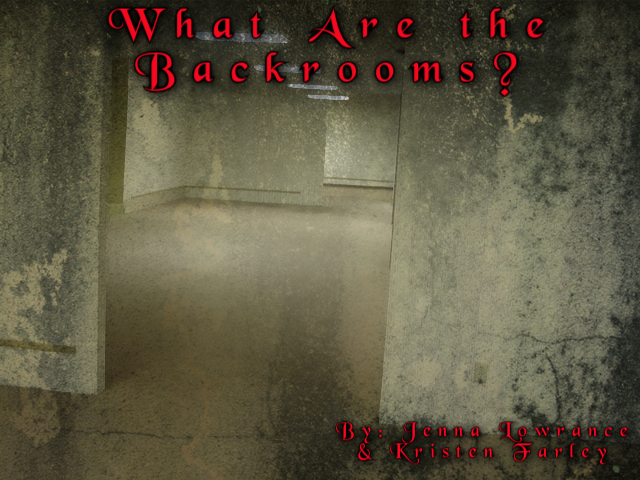 The Backrooms is a creepypasta, or legend about a labyrinth of random rooms, hallways, levels, and pretty much anything you can imagine. Each room/level contains its own array of beasts, monsters, and/or entities. Each level also has its own characteristics. There’s no one for-sure way for someone to enter the Backrooms. People that have claimed to go there say they found themselves in the Backrooms by means of touching a wall that seems out of place, going into an area that doesn’t feel right, or simply going there by accident in a dream. Although the name may seem non-threatening, don’t be fooled. The Backrooms are known to be extremely dangerous.

Here is everything you need to know about the Backrooms Levels 0 and 1:

Most likely the first level you’ll encounter in the backrooms

Repetitive
Smells like old moist carpet
Endless background noise of fluorescent lights buzzing
Approximately 600 million square miles
Randomly segmented, empty rooms
Few hallways
Few flights of stairs
You can tell if someone tried to escape the level when you see cracks/holes in the mono-yellow wallpaper
Some walls might have outlets, but most are useless
Sometimes cameras can be seen on the ceiling [RARE]
Some rooms/groups of room can be seen stained blood red [RARE]
Some rooms can be filled with decorations & other miscellaneous objects
There are a few pitch black rooms [you may hear whispers]
Safest level by far in the main 9
Meeting an entity is rare in this level, but can happen

The only creatures of the backrooms ever caught on video
Dangerous if provoked
If you hear a low rumble, back away slowly
From far away they resemble black dogs
Up close they look like contorted humans that run on all fours
One of the most common entities
Mostly seen n level 3, but can be found on most levels
H.P. Lovecraft fans compare these entities to The Hounds of Tindalos

A faceless child wearing a vest and jeans, usually found on levels 2 & 3
Always shows up in groups of three
Tricksters
Have been known to be violent

A faceless adult wearing a plaid button-down shirt
Friendly
Only hostile when provoked
Can be male, female, or androgynous

More specific types of facelings would include:

You can only survive this entity if you run until it loses you
Extremely rare
Is very bright & will blind you
Same speed as an average person
If you get close to it you will feel hotter and hotter until you ignite & vaporize
You only vaporize if you touch it
Run through random areas to lose it
Small limit to stamina [they can only run 30 meters]
If you lose it, you’re safe

Level 1 is the 2nd level of the backrooms, roughly the same as Level 0 with only a few “minor” differences

Varies from person to person
Most common is gigantic biomes or vast expanses of grimy concrete with a low flying fog.
You could see dark rooms made of blue concrete  covered in pipes.
Level 1 is totally random
In Level 1 you will likely see concrete walls  instead of level 0’s mono-yellow wallpaper, tile floors instead of carpet, and dimmer fluorescent lights.

Normally docile
Only become agitated when touched
Avoid them whenever possible
Tall
Pale yellow
Humanoid with sunken white eyes
When agitated they hunt you down & charge you at an extremely high speed, kill them [details unknown], take their target’s skin, and wear it as a disguise
Explorers with huge scars along their chest, neck, or veins they may be a skin stealer
They have transparent blood
“Blood is read, he’s not dead. Bloods not in sight, get ready to fight.”
Typically found on levels 1 & 2

Very hostile
Inhabits levels 1 & 2
Grey & disfigured
Slender & tall
Looks slightly humanoid
No eye’s & claws that can extend to a full foot long
If they’re close, , you will hear a scratching noise, if you hear it, run
Superhuman hearing
Very aggressive & will not hesitate to kill you
Attracted to sound
Almost blind
Very agile, and can run at up to 40 mph, though they usually don’t exceed 15 mph
Very intelligent
Most likely discovered by the Republic of Level 153

There are currently 8 known colonies and outposts in Level 1:

Enter level 1 by spending 4 days in Level 0
You may find a fire escape that leads to Level 1 [rare]
Can also be reached randomly by hallways, staircases, or elevators
You could just spawn there
You can also enter Level 1 if you enter the correct code on the number pad on Level 1051

It’s possible to leave when just exploring
Level 1 usually leads to Level 2 or back to Level 0
Breaking through a cracked floor will lead you to a room in Level 0 with a cracked floor, breaking through the cracked floor in the level 0 room will lead you to Level 27
It is possible to no-clip through walls – this will take you to Level 229 or Level 188
To get to the hub from Level 1 you go forward through a door, to the end of a hall, turn around and double back, go into a room with 2 pathways . Go left, right,left, then right and you should end up at 2 doors labeled A and B. Take B. This will lead you to an identical room, take A. You are now in the hub.

As you can probably tell, there is a LOT to the backrooms; from countless levels and sublevels to beasts and beings unimaginable. Although there is no concrete proof that the Backrooms do in fact exist,there are several accounts made by people who have claimed to find themselves there. There’s not one “for sure” way to survive the Backrooms, or even get out. There’s also no guarantee that you’ll ever find yourself there. All we can really say is, stay safe. This concludes our Part 1 explaining some of the levels in the Backrooms. As we said before, there is a LOT to the Backrooms, so it would be nearly impossible to fit it all into one article. So, keep a look out for Part 2!