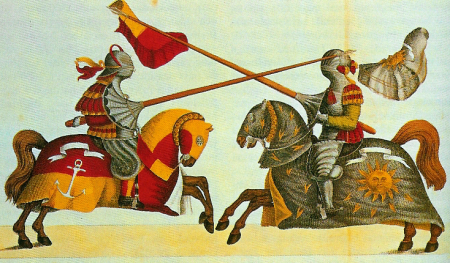 Skittles: The medieval sport of Skittles is/was very similar to modern bowling. The rules were simple. Each player would roll a wooden (or rubber) ball at nine oval-headed pins. The player who knocked down the pins (with the fewest amount of throws) first was the winner!

Jousting: Jousting consisted of two armoured knights on horseback, charging at one another with raised lances, in an attempt to unseat one another; or, in other words, knock the other off their horse. Most jousting tournaments were usually not very regulated, whether it was for the purpose of training the knights, or the entertainment of the nobles.

Shinty: Shinty was a game played outdoors with sticks and a small ball, in which two opposing teams attempted to hit the ball into the other’s goal. The game is comparable to modern field hockey, and may have originated as early as the 17th century.

Hammer-throwing: This sport is exactly what it sounds like. The game consisted of standing in a 7-foot circle with a 16-pound hammer. The object was to see how far you could throw it. Hammer-throwing was developed into an official sport centuries ago in Ireland.

Stoolball: It is believed that the game was originally played with tree stumps being used as bases, or “wickets”. The object of the game was to defend the stool or stump. A “batsman” would stand in front of the stool while a “bowler” threw a ball at it. If the ball hit the stool, the batsman was out.

In conclusion, medieval sports and modern sports have a lot more in common than most people would think.