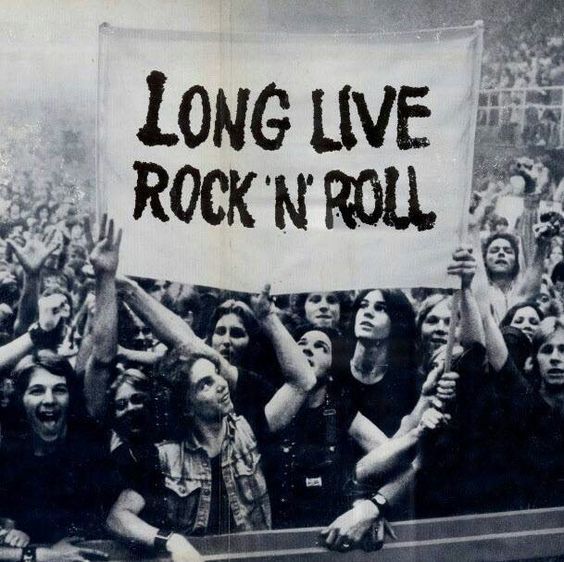 Ever since its first appearance in the 1950’s, rock and roll has been one of the most popular genres of music. From the more subtle sounds of the 70s, to the more lively and extreme artists of the 80s, rock and roll has gained quite a following; and unsurprisingly so. Nearly every single person alive has heard rock and roll music, whether or not they enjoyed it.

For example: do you remember ever being in the car with your parents and hearing “Nothin’ But A Good Time”? How about “Living On A Prayer”? “Pour Some Sugar on Me”? “Sweet Child O’ Mine”?

If any of those songs ring a bell, then you know what Rock and roll is. Some of us grew up listening to and enjoying music like this; a lot of us still do. Some people didn’t like it, and wrote it off as “old people” music that our parents listened to. That’s fine too. However, I think many people don’t realize how much that “old” music has done for today’s music.

To explain further, countless of today’s artists have admitted that they were inspired by 60’s, 70’s, or 80’s musicians. Examples include Harry Styles, Lana Del Rey, Greta Van Fleet, and John Legend. If it weren’t for “old dad music”, who knows what music would be like today?

The point is, rock and roll has influenced thousands of people, whether you realize it or not. It’s a great genre, with great music and artists with songs that can make you feel happy, pumped-up, or even sentimental. Thats right. Rock and roll artists can have sentimental songs.

Take “Faithfully” by Journey for example. It’s about a man who’s a musician, so he’s on the road a lot and doesn’t get to see his wife or family much; but their love stays strong regardless.

So, really, Rock and roll  isn’t always loud and aggressive. There’s music for everyone.

You may be wondering what the point of this article is. Is it to try and prove my point that Rock and roll is important? Yes, but there’s also something else.

As good as all these songs are, the artists getting older is inevitable; which means, most of them no longer produce music. That means that there’s less and less Rock and roll music being made all the time. The genre has been on the decline for years, actually. In fact, Gene Simmons of Kiss has made the statement several times that “rock is dead”.

The short answer is yes. After having these artists for years and years until they can no longer make music, the sad fact is that it’s impossible for rock and roll to remain the same. Artists like Led Zeppelin, The Beatles, Pink Floyd, and etc. will never produce new music again.

Another thing: the word “rock” or “rock n’ roll” is getting thrown around a lot these days. Anything slightly different from the normal pop genre is almost immediately considered “rock”, which simply just isn’t true. I’m not bashing anyone that listens to new “rock”, but they should at least know that the artists they’re listening to are being mislabeled. Almost no one produces true, or original, rock anymore.

The alternative answer is, no. Rock isn’t dead. It lives on through the remaining artists of the past decades that still do shows and perform. Not only that, but there are actually a few artists i’ve found that make the closest thing to “old” rock that you can get.

Greta Van Fleet is an artist, that many agree, sounds very much like Led Zeppelin. They also produce music that sounds like something Zeppelin would make. Some complain that GVF is only “copying” Led Zeppelin. Others say they’re helping to keep that type of music alive. Nonetheless, if you’re interested in a band like this, you should definitely check out their songs “Highway Tune”, “Mountain of the Sun”, and “Safari Song”.

Another great band i’ve found is Stone Nobles. They’re not very popular. I originally found them on Tiktok, actually. However, they’re very good. They embody nearly all the elements of old rock. If rock and roll is your favorite genre, you’ll definitely be into the Stone Nobles. You can check them out on Youtube.

So, the question remains: Is rock and roll dead? If you ask my opinion, I say no. Although music is constantly changing with the generations, I believe that rock and roll can still live on through artists that try to keep the genre alive. We’ll always have our cassette tapes, t-shirts, and vinyl records of our favorite old music. If we all help keep it alive, rock and roll will never die.