Choctaws Come Up Short Against Cougars 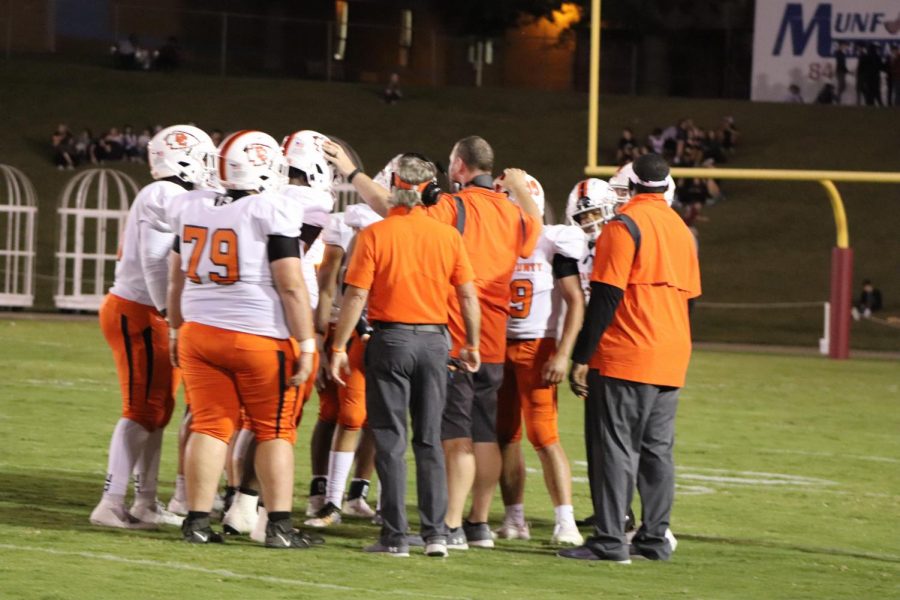 Defensive coordinator Justin Dubruiel taking a timeout to talk with his defense.

The Choctaws were set to receive the opening kick-off but,  fumbled it and allowed the Cougars to recover in Choctaw’s territory.  Less than thirty seconds later Munford had scored. They decided to go for the 2-point conversion which was good to go up 8-0.

Dyer County was able to answer the call on the next drive. A series of rushing drives facilitated by quarterback Drae Stafford led the Choctaws down the field into scoring position. Brayln Taylor ran the ball in for Dyer County’s first touchdown of the game. Dyer County attempted to tie it up with a 2-point conversion but was unsuccessful to put the score 8-6.

The Choctaw’s defense showed they were still unable to contain the Cougars as they scored another quick tochdown and converted the PAT to increase the lead to 15-6.

However, the orange and white would come back with another touchdown of their own, again from Taylor, and Jacob Hampton knocked in the extra point to cut the lead to two at the end of the opening frame.

That was the closet the Choctaws would get to the Cougars as the second quarter saw two more scoring drives from Munford for a 37-13 halftime lead.

Dyer County tried to mount a comeback in the second half with a long scoring drive ending with a touchdown pass to tide end Drew Evans, his second on the season. Unfortanely the 2-point attempt was no good so the score was 37-19.

Munford made it clear they were not done yet finishing the quarter with two more touchdowns pushing the lead to 51-19 at the end of the third quarter.

The Choctaws scored again in the fourth, this time by Jabari Livingston, but it was too little too late. After the Choctaws failed on a third 2-point attempt Munford won the game 51-25.

The game evened the Choctaws record at 3-3 as they hope to improve it this Friday night at home against Memphis Overton.