The Shape of Water: Why It’s More than Just Fish Love 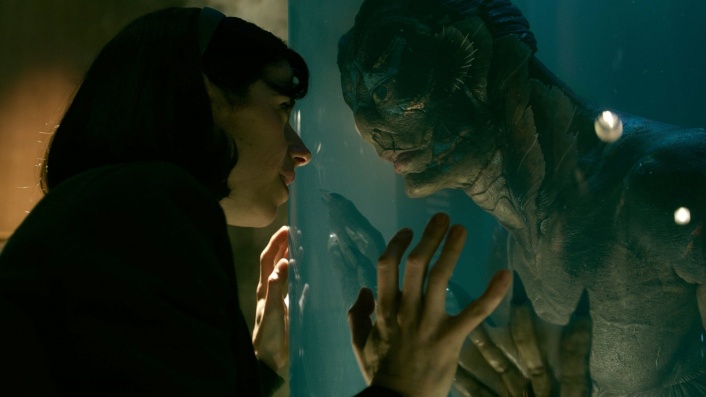 Guillermo Del Toro is no stranger to the unnatural. Directing movies such as Hellboy, Pan’s Labyrinth, and others, he directed the 2018 film The Shape of Water. The movie takes place in Baltimore, Maryland in the 1960s. A young woman named Elisa Esposito (played by Sally Hawkins) is a cleaning lady at a top secret facility. Elisa was found in a river as a baby with scars along her neck, which cut her vocal cords. Elisa communicates through ASL. She is considered an outcast among everyone else, and the only people she considers friends are her neighbor Giles (played by Richard Jenkins), a old gay artist who struggles to get his art out there, and her co-worker Zelda (played by Octavia Spencer), a black woman stuck in a bad marraige. These three are all outcasts in their own way, and they are all struggling to live. While working, the facility receives something called an Asset, which was brought in by Richard Strickland (played by Michael Shannon). Strickland discovered a humanoid amphibian creature in the Amazon and brought it to the facility. Strickland is rude and demanding, and he appears to call the shots when it comes to what will happen to the Asset. The film provides great historical context, as the great space race between America and Russia of the 60s. Strickland plans to kill the creature and dismember it to send it into space. Elisa comes across this creature, and approaches it with kindness. Elisa doesn’t see it as a monster, and treats it as a friend. She brings him eggs to eat during her lunch, and she teaches him sign language to help him communicate. Elisa grows a close relationship with the creature. A romantic relationship. In fear of losing him, Elisa manages to bring him out of the facility and to her own home, where she houses him in her bathtub. Elisa grows closer and closer with the creature, to the point where she’d rather die than live without him.

The film was praised by film critics. The film won four Oscars: Best Achievement in Directing, Best Motion Picture of the Year, Best Original Score, and Best Achievement in Production Design. All in all, the film was nominated for 60 awards, and won 21. However, some people see it as “woman falls in love with a fish” or a reverse The Little Mermaid. In my opinion, there is a much deeper meaning behind The Shape of Water. It’s all a matter of reading between the lines and figuring out what the message is behind the movie, as well as reading the characters and putting together the pieces.

The first meaning we can conclude is the feeling of being an outcast, and being shoved away by everyone. We’ll start with Elisa. Elisa is mute, and she can only communicate with sign language, which no one can really understand except for Zelda and Giles. Elisa is called “dummy” and “the mute” multiple times during the film, and Strickland even tries to prey on her using a line that directly references her inability to speak. Elisa doesn’t feel like she belongs, and that she wants to find a better place for herself. Somewhere where she feels at home.

Now we’ll look at Zelda. Racism was a major issue back in the 60s, and African American people were starting to make progress in gaining equal rights and treatment as whites were. While there was some progress, there were others who didn’t have that belief that blacks and whites were equal. When talking with Zelda, Strickland refers to her race as “your kind”. Another way of being an outcast. Zelda, however, doesn’t pay mind to the hurtful comments. She continues being a nice person and addressing everyone equally. However, she is Elisa’s best friend and constantly sticks up for her, as well as translating for her. Zelda is also stuck in a bad marriage with her ungrateful husband, Brewster, who she constantly talks about at work.

Giles. Giles is an artist who breaks his back trying to produce art that is worth selling. While failing to make his art public, he struggles with homosexuality. For more historical context, the move for gay rights began early in the 1960s. Giles is lonely, with no family or friends to turn to except for Elisa. Even then, she sees him very rarely because she works the night shift and sleeps during the day. Giles feels an outcast because of how lonely he is in the world, and how he struggles to cope with that loneliness, his failing career, as well as his sexuality.

And finally.. The creature. The creature was actually all SFX, worn by actor Doug Jones. The creature is an outcast for one reason: he’s a monster. Well, “monster” is a little harsh, but you understand my point. He is a creature that is not human, and he is considered nothing but an object to the head scientists and Strickland of the lab. He is shocked, beaten, bullied, all of it. Elisa witnesses this firsthand and it tears her apart. It is called ugly, gross, just all kinds of harsh names. But at the same time, the creature harbors emotions and thoughts, and it’s capable of understanding others’ emotions, and reflects its own thoughts and feelings.

Isn’t that similar to Elisa? The name calling, the lack of speech, etc.? Think about it. Both the creature and Elisa were outcasts, and they were both considered freaks by everyone around them, and they both wanted a place to belong. That’s where the connection began. Elisa saw the creature as harmless, and that it was hostile because it was suddenly in an unusual environment, after being taken away from its home in the Amazon. Elisa approached it with kindness and helped it to understand that she didn’t wish any harm upon the creature. Elisa confides in the creature, and she spends all her time with him. She feels like she belongs with the creature. She considers him the best thing in her life, and even her friend Giles understands that Elisa needs the creature in her life, and aids her in taking it from the lab. The movie centers all around the idea that there is a place for everyone, even in the most unusual of places. If it’s a small diner where they serve key lime or a fish man, everyone has somewhere where they belong. That’s what makes The Shape of Water more than just a woman who is in love with a fish.

The Shape of Water is available to stream on Hulu Plus, Vudu, Google Play, Amazon Prime Video, and iTunes.