Putin has gone too far!! 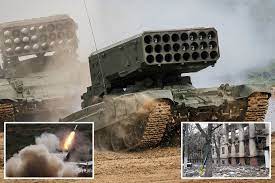 Has Putin gone too far? Recent articles and news broadcasting stations are showing the extreme measures that Putin is taking during this war with Ukraine. Over the past week and a half, Russia has been invading Ukraine. First, the intentions were to go in and take over, but those plans didn’t include how hard Ukraine would fight back. Russia has honestly admitted that Ukraine has fought back way harder than it had originally expected. Though all Putin cares about is wanting to take over, does that give him the right to go from a thought to be a peaceful takeover to practically a brute force invasion?

Many people may not know but approximately 2 million Ukrainians have fled their homes in as little as 12 days to escape from war with Russia. As if this is not bad enough Putin has begun purposefully attacking civilian locations killing thousands of innocent people. There have been many reports of apartment buildings and home bombings. One attack specifically that happened yesterday in Mariupol an airstrike was released on a maternity hospital with three fatalities and reports of children underneath the rubble.

As if that wasn’t enough Putin has faced many allegations that he has allowed the use of thermobaric weapons also known as aerosol bombs, vacuum bombs, and fuel-air explosives (FAE). They are saying he has used these weapons on Ukrainian soldiers, but some say that he has targeted civilians with them which could be considered a war crime. These weapons have a two-stage munition. The first-stage charge distributes an aerosol made of very fine material, then the second charge ignites the cloud creating a huge shockwave and a vacuum that sucks up all the surrounding oxygen. They can last significantly longer than conventional bombs and have the capability to vaporize human bodies.

Putin truly has gone too far this time trying to take over Ukraine, and how much more does he plan to do. People have gone as far as saying that what Putin is doing is not just taking over. Some people believe this is all a spiritual quest for him, and that he is trying to cleanse the earth. NATO continues to say they will not get involved until they step foot on NATO land, but how far will we let this go; how much more will we let Putin do. That’s the scary thing about this conflict no one but Putin knows the lengths he will go to get what he wants.