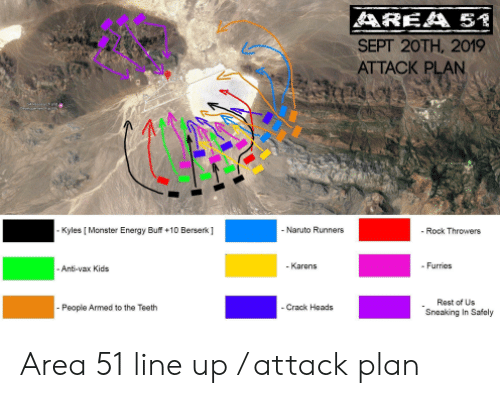 As you have probably heard by now a popular meme account owner on Facebook, Matty Roberts, started a page in early July called  “Storm Area 51, They Can ́t Stop All of Us”. The page lists the event time as September 20th, 2019 at 3:00 am. According to the page, the preferred method of invasion is “Naruto Running” which is a form of running popularized by Naruto Uzumaki. This consists of running with your head down and arms stretched behind you. The page reads “We can move faster than their bullets.”

Is the government hiding information about the existence of aliens? This is the age-old question that inspired this Facebook event.

̈It’s entirely satirical, and most people seem to understand that,̈  is what Roberts has been reported to say when he was asked about the idea of thousands of people showing up at Area 51. The event has caught the attention of a few million people around the globe, and even over two million Facebook users have said they’re ́Interested ́ or  ́Going ́ to the satire event. Although most seem to understand to not actually storm the military base, the mere idea of even a couple hundred showing up on September 20th has alerted military officials into issuing warnings and declaring emergencies for Nye County on two separate occasions this past month.

Now that you are aware of the meme, what exactly started the search for ”them aliens?” Beginning in 1947, the first UFO sighting occurred when a “UFO” crashed in Roswell, New Mexico and was later said to be a weather balloon. Although the sightings were debunked, the public ignored the government’s response and there were over 12,000 UFO sightings by 1969. Most of those sightings were suspiciously reported in Nevada near a top-secret military base, Area 51. This place was so secretive that the government refused to come out and say what was going on until 2013, stating that it’s an air force base.

Although all of these UFOs were being seen in Nevada, no one was really piecing it together until a guy named Robert Lazar began speaking on his experiences working near the site in 1989. Robert Lazar has been apart of interviews, articles, and even a self-made documentary named, “Bob Lazar: Area 51 and Flying saucers.” Robert is a scientist and has spent most of his career studying the 115th element and claimed that he worked on extraterrestrial spacecraft that used this unknown element as a fuel. What makes this more interesting is that the creator of the Area 51 meme got the idea after watching Roberts ́ documentary.

Although the raid will most likely be on a very small scale, (if at all) there will be fun activities surrounding the base. There will be a festival near the site named “Alien stock”, said to have big names playing. There will also be an Area 51 basecamp with different installments at the event such as Bob Lazar, musicians, alien inspired art, telescope viewings, and more! The widespread panic within the meme has lessened with time, and realistically, we should not expect a raid.